Skip to content
Previous Next
Liver Problems In Dogs, Cats And Horses

Liver problems are common in domestic animals such as dogs, cats and horses. The same factors that stress the human liver can adversely affect the function of the liver in your beloved pet or champion racehorse. Horse feed and pastures can contain pesticides and unfriendly microorganisms, in which case the animal must be removed from the toxic agent immediately. Some chemicals used to eradicate fleas can be liver toxic.

Commercially produced pet food is often too high in hydrogenated fats, sugar, gluten, salt and filler additives. Parasites and viruses can attack the animal liver, causing liver cysts and hepatitis. Many cases of obesity in cats and dogs are associated with a fatty liver. Horses can also suffer with a fatty liver.

Early diagnosis of liver disease in animals is important to prevent further destruction of the liver cells. Our Liver Health Advisory Service has received many calls from distressed pet owners who have discovered on a blood test that their pet has abnormal liver function. In such cases, nutritional medicine is often very effective and easy to implement. I have gleaned the following information from talking to veterinary doctors but you should always check with your own vet if your pets have problems.

Cats and dogs with disturbed liver function can be helped with the following program:

If your pet has a fatty liver, immune dysfunction, or is overweight, avoid cow’s milk and all other dairy products. Lactose intolerance is not uncommon in dogs and cats and can cause bloating, gas and diarrhea. It is easily overcome by eliminating cow’s milk.

Avoid foods which are toxic to the dog’s liver – these include onions, grapes, ham, chocolate or any unusual foods. Check with your vet for further information regarding toxic effects of some foods on your pets.

If the animal has parasites such as worms (and most do), talk to your vet about using raw garlic cloves (either juiced, crushed in a garlic press or finely grated) and mixed throughout the food at least three times a week. You can do this between your regular worming treatments. Your pet will not notice a problem with his or her social life!

Important note: Cats are very susceptible to liver damage from the analgesic drug acetaminophen (also known as paracetamol). Even one tablet of paracetamol can cause fatal liver failure in cats.

Taking care of your dog’s liver and immune system

I have always been an animal lover and before I went to medical school I did one year of veterinary science at Sydney University. Then, fortunately for all my patients I changed to medical school but always had dogs as pets and they have taught me so much.

Here are two interesting cases of animals and nutritional healing.

Here is one that was emailed to me from another animal lover called Betty. Thanks Betty!

The adventures of Itti Bitti

We got Itti Bitti (Bitti) when she was two years old and immediately after we got her it was obvious she wasn’t well taken care of. She arrived by air carrier from a breeder in Florida who had held off selling her hoping she’d make six pounds so she could breed her.

Her breath was absolutely horrible, and she just smelled bad! It was obvious that she was so toxic that for two days she ate nothing from morning to night except watermelon. She just would eat nothing else, and just consumed it with a passion! After three days, the odors passed and a bath helped immensely.

We went off to the vet only to find out that eight of Bitti’s teeth were rotten and had to be removed. As time went on she kept losing teeth and finally developed liver spots all over her stomach and back, her hair thinned out terribly, and she simply slept for days on end, eating very little. This is all aside from the excellent care we gave her with homemade meals and nutritional supplements from Standard Process and Dr. Wysong.

Then I was diagnosed with Primary Biliary Cirrhosis and discovered “The Liver Doctor” on the internet and ordered the Livatone Plus. When I went to my naturopathic nutritionist about the problem, he was glad to hear that I was using Livatone Plus because that was what he was going to recommend to me.

I looked at the ingredients and there didn’t seem to be anything that would hurt Bitti so I started sprinkling the powder on her food. Within two weeks her energy level increased remarkably, and the liver spots started going away. Then a couple more weeks later and her skin, which had been more like eczema skin on a person, cleared up and her hair started growing thicker. Today, approximately two months later it’s a part of her daily regime to get her Livatone Plus and she’s perfectly healthy. She’s doing really great and you’d never have known she had any problems. 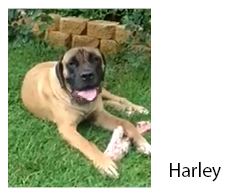 Let me tell you a little story about my bull mastiff, Harley, who was the cutest little black faced puppy back when I acquired him in September 2011.

Well, much to my horror, this perfect specimen of a puppy caught the mange from another dog. The local vet did not realize Harley had mange, as it became infected with bacteria. Harley was then treated with antibiotics and tea tree oil and developed an allergy, which made his rash worse. I scoured the Internet with Google scholar and made the diagnosis myself – Harley had the dreaded mange!

I was away from home for 7 days and so I called a wonderful vet Dr Ian Billinghurst, a holistic vet who wrote a book titled Give Your Dog a Bone, which I highly recommend for all dog owners. Dr Billinghurst told me to purchase the liquid treatment for mange called Advocate, which I did, however, I could not apply it to Harley until I returned home.

When I finally arrived back home, Harley bounded into my arms and we had a cuddle. I examined his skin and was delighted – his mange was 90% gone!

It was then that I discovered Robert’s mistake and realized that Harley had been taking 600 mcg of selenium daily for 7 days – and then I understood the connection. The stubborn rash and sores caused by the mange had been almost eliminated by the selenium, as Robert had not been giving Harley anything else that was different. What had happened is that the selenium had strengthened Harley’s cellular immune system quickly and it had eradicated most of the infection. Harley was a very happy little man, but just to be sure we applied the Advocate liquid.

Many dogs have skin problems which can be helped with supplements of selenium, good quality fish oil or cod liver oil and a liver formula. Hemp seeds and ground flax seeds are also good for their skin. If your dog has skin problems such as dermatitis, frequent itchy rashes or skin lumps that the vet cannot cure, and are not caused by fleas, it is vital to exclude gluten from their diet. Gluten is found in many processed, dried dog food. Dr Billinghurst recommends a gluten free diet of meat, bones and vegetables.

Liver problems in the horse may cause the animal to be depressed and sluggish, off its food or to lose weight. If ammonia levels build up in the blood stream, the horse may display strange behavior such as head pressing, wandering and yawning.

Chlorophyll (the green pigment in hay, chaff and grass), combined with liver disease, can cause unpigmented areas of the skin to become sensitive to sunlight (photosensitization). Skin irritation and inflammation result, and the horse should be protected from direct sunlight.

There may be color changes in the urine, feces and eyes such as dark urine, pale feces and yellowish membranes in the eyes and mouth.

Awareness and prompt attention to signs of possible liver dysfunction are essential for a good outcome.

Horses with disturbed liver function should have the following foods added to their regular feed:

Case history of a horse

The most glamorous case history of how the liver can affect an animal is reflected in the story of “Kala Beat,” named “Horse of the Year” in 1995 by the Northern Rivers Racing Association, for its racing wins in Northern NSW, Australia.

This great champion started to lose his energy and stopped winning races that should have been a snack for him. The veterinarian discovered that the horse had an elevated liver enzyme count, with a reading of 90, instead of the normal below 30 that is found in horses. The owners had heard of the good results being achieved by people taking the liver tonic Livatone, and they commenced Kala Beat on the Livatone in horse sized doses after contacting our Health Advisory Service.

After 10 weeks of the Livatone treatment the horse’s liver enzyme levels were down to 33, which was much better than the horse had maintained in several years. The owners were delighted and recommenced Kala Beat on the racing circuit with fabulous wins ensuing. Unfortunately, they forgot to tell the team at the Health Advisory Service, who would have bet on this liver happy champion had only they known!