The gynaeoid shape is the most common female body shape. This type of woman is pear-shaped with average to small-sized shoulders, variably-sized breasts, a small waist, curvaceous buttocks and rounded thighs. She is voluptuous in a way that resembles Marilyn Monroe or Beyonce and was typically the subject of the great French impressionist painters. She is the model of yesterday and is generally curvier than the lean to skinny fashion models of today.

The female hormone estrogen produced by the ovaries causes the selective deposition of fat cells in the areas of the breasts, buttocks and thighs. The gynaeoid woman usually has plentiful supplies of estrogen, and indeed if she becomes overweight, she often has excessive amounts of estrogen or an “estrogen-dominant state”. Excessive weight will be deposited particularly in the lower half of the body in the feminine areas such as buttocks, pelvis, hips, thighs and eventually the breasts. It is unfortunate that this type of fatty tissue may become uneven and lumpy, resulting in tenacious cellulite. We call this type of weight gain lower-body-segment obesity, as it is mainly conﬁned below the waist.

The large deposits of fatty tissue are in themselves hormonally active and produce signiﬁcant amounts of estrogen, in addition to the ovaries pumping out their own monthly surges of estrogen. It is thus easy to understand why an overweight gynaeoid-shaped woman tends to have very high levels of estrogen, which will act to further exaggerate the deposition of fat cells in the feminine curvy areas, especially the buttocks and thighs. Thus, the gynaeoid woman is often frustrated by her large bottom, which may start to droop downwards and backwards as she ages. The famous actress Elizabeth Taylor was a classical gynaeoid woman who did not always manage to keep her estrogenic curves under control.

The dominant hormonal glands in the gynaeoid woman are the ovaries. If you are a gynaeoid woman, as a generalization, you will normally be fertile and fall pregnant easily!

Many gynaeoid women ﬁnd that when they become signiﬁcantly overweight, they develop health problems due to excessive estrogen production from their ovaries and fat deposits. There are several areas in the body that are very sensitive to the effects of estrogen, especially the breasts and uterus. Estrogen stimulates the breasts and uterus to enlarge and if excessive levels of estrogen are sustained, the breasts may become larger, tender and lumpy and the uterus congested with a thick lining. This latter effect can result in increasingly heavy menstrual bleeding and period pains and increase the risk of ﬁbroids and endometriosis. Gynaeoid women tend to produce more estrogen than progesterone and this relative excess of estrogen is called “estrogen dominance”.

You can now understand how weight excess increases the incidence of gynecological problems, especially in gynaeoid-shaped women. We also know that overweight women have a higher incidence of cancer of the uterus, ovaries and breasts, partly because of the link between excess weight and hormone imbalance. Gynaeoid women, and indeed all women, can reduce their risk of cancer by avoiding obesity. For more information see my book I can’t lose weight and I don’t know why!

The gynaeoid body type in women 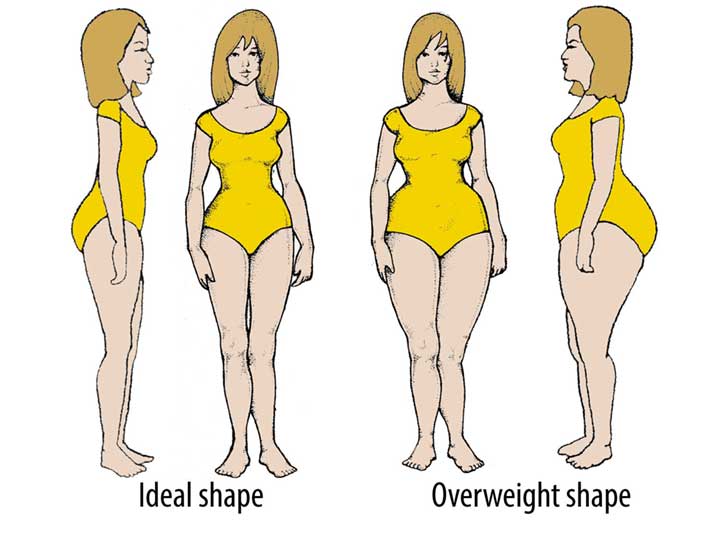 Each of the four different body types has unique hormonal and metabolic characteristics. That’s why some people put on weight easily and others don’t!

It is possible however to change the distribution of fat and muscle in your body, not only with exercise, but also with the technique of nutrigenomics. Nutrigenomics is best described as turning off or on certain genes, by using specific supplements and foods. By regulating such genes, we can change our metabolism, our biochemistry, our hormonal balance and in the long term, our body shape.

Gynaeoid women should aim to avoid foods combining fat and sugar together (i.e. chocolate milk, cakes containing cream, sweet biscuits, custards and ice cream) They should have regular protein such as seafood, eggs, yogurt, cheese, free-range poultry, nuts, seeds and legumes and wholemeal cereals. They should exercise the legs and buttocks with an exercise bike, brisk walking, skipping and swimming.

For gynaeoid body types, the products that would be most suitable are Fem Pro, Metabocel, and Livatone Plus.