Methylation – A New Key To Health And Anti-Aging

Recently everyone has been talking about a biochemical process in the body called methylation and doctors are starting to realize that it is vital to good health and staying younger for longer. Now we all want that right? When you hear the words methylation and biochemistry you probably tune out because it does not sound exciting or relevant to your daily life. Well, in reality, it is hugely relevant to all of those people who want to stay healthy and young. Basically methylation is a process that helps your body to work more efficiently – it is your body’s helper!

Methylation reactions are very common in the body and involved in most body functions, to some degree. This is why compromised methylation can cause or contribute to almost all health conditions. Most people today have inadequate methylation, so this becomes a very important subject.

So what is methylation?

If you want to describe the biochemistry of methylation, it is the addition of a methyl group (a carbon surrounded by hydrogen atoms – CH3) to another substance in the body and it occurs around a billion times per second in your body – wow, it must be important! The process of methylation occurs in all the body’s cells but is especially crucial to healthy liver function and detoxification.

Methylation reactions are very common in the body and are involved in most body functions to a significant degree. This is why poor methylation can cause or contribute to almost all health problems and inflammation which accelerates aging. 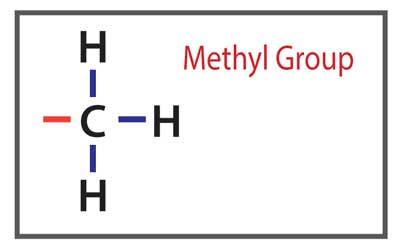 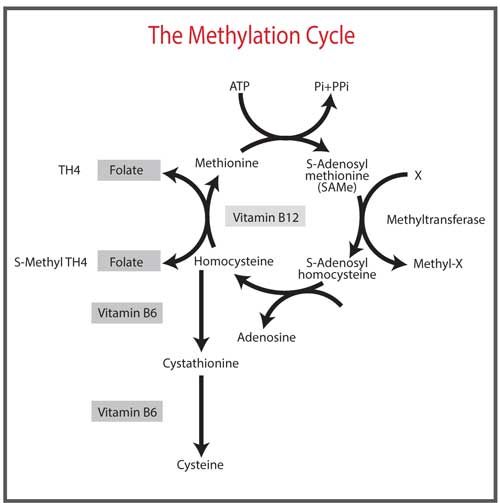 See pictures of a methyl group and the methylation cycle above.

When the substance receives its methyl group it can go out in the body and perform its functions.

If your body is slow or inefficient at making this cycle happen correctly, you will be prone to emotional illness, inflammation and fatigue and many other health problems. 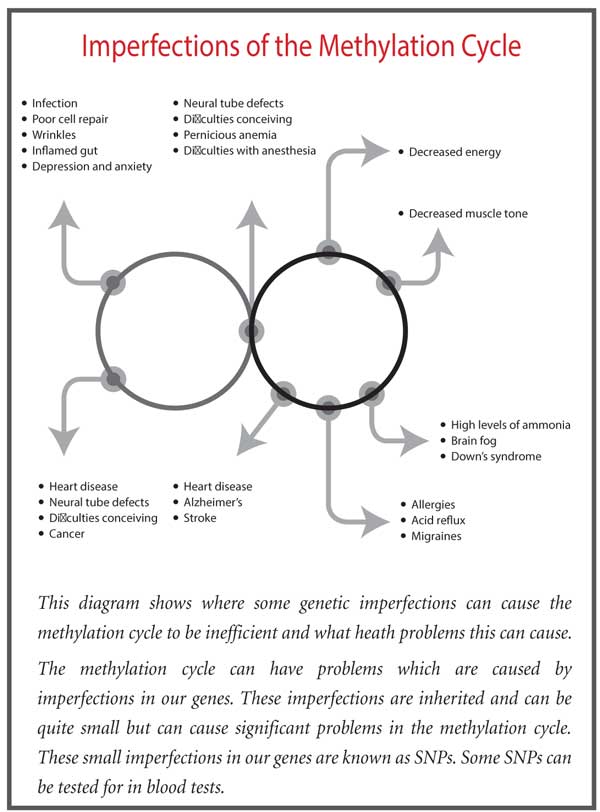 Methylation is a primary method of removing toxins in the phase 2 liver detoxification process. Methylation converts toxins of all kinds from insoluble or fat-soluble compounds into water-soluble compounds. Once these toxins are made water soluble they can then be easily eliminated from the body via watery fluids such as the urine, sweat and bile. If this does not occur, these toxins cannot be eliminated and they will build up in the body.

Methylation tags toxic substances so they can be changed in a way that allows the body to identify them as toxins and then eliminate them rapidly and more easily. Larger toxic molecules are then able to be eliminated through the bile, while smaller ones pass into the bloodstream and are removed by the kidneys in the urine and in the sweat.

Why are some people inefficient at methylation?

Other benefits of methylation

Methylation is needed for synthesis of dopamine and serotonin. In other words, you need to be good at methylation to feel happy, relaxed and mentally switched on. This also reduces your risk of dementia.

Protein synthesis from our genes

Methylation is a key step in the formation of our proteins. This process is called genetic transcription. Because methylation is required for protein synthesis it can increase and maintain muscle mass. This is beneficial in wasting diseases such as cancer and AIDS, and for those who want to remain fit and athletic. This aspect of protein synthesis aided by extra methylation is widely known in the livestock industry.  Methylating agents are added to some animal feeds.

The telomeres are the body’s “tails” on its DNA and chromosomes and they can be compared to the hard plastic ends on your shoe laces. If your telomeres are not protected you will age more rapidly. This is one of the ways that good methylation slows down the aging process.

Methylation converts homocysteine, (which is a toxic amino acid when in excess), back into methionine and other amino acids which are beneficial.

About 50% of people have genetic variants of the MTHFR gene and enzyme, causing them to have some difficulty in getting rid of homocysteine. This can increase cardiovascular disease and blood clots. This can be overcome by taking supplements to improve methylation.

Methylation is involved in balancing hormones, such as restoring the proper balance of estrogens, and it does this by improving liver function. This helps to reduce the risk of hormone-dependent cancers.

You will also require vitamin B12 in the form of methylcobalamin.

Most fatigued patients do not make enough methyl groups (CH3) in their body. Taking the supplements mentioned can increase production of methyl groups and some foods are high in methyl groups.

These foods include – lamb, chicken, beets, liver, quinoa, spinach and other dark green leafy vegetables and green herbs, and beets. Cooking green vegetables improve the availability of their methyl groups.

If you are a strict vegan you are likely to be low in methyl groups, as well as vitamin B 12, and may need to supplement. Processed foods are very deficient in methyl groups.

Blood tests to check for slow methylation include –

Livatone Plus has been reformulated and now contains –